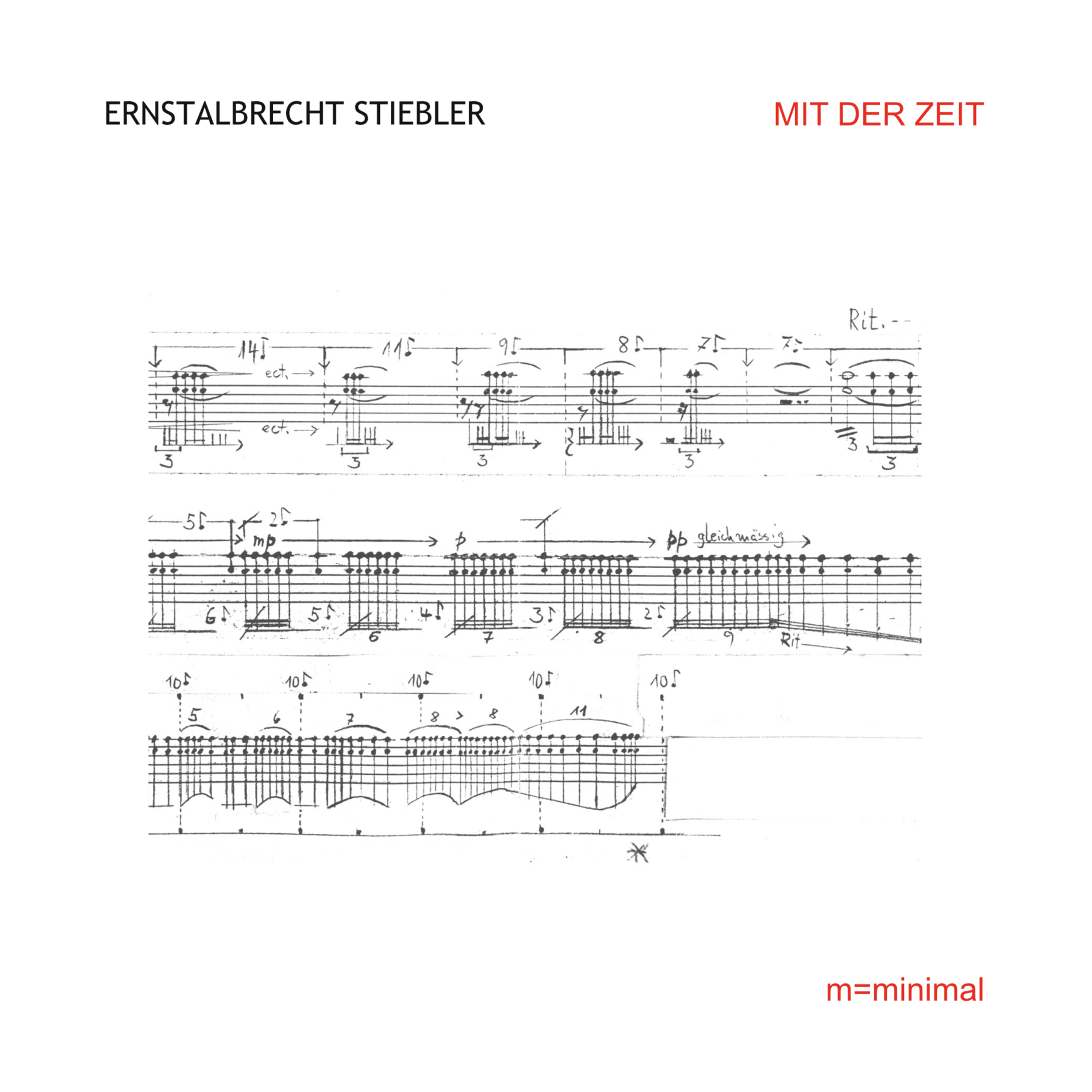 Mit der Zeit by Ernstalbrecht Stiebler is a music that does not intend to leave time forgotten but rather wants to make it a friend: a friend
to whom time is granted. Sounds are allowed to spread, to build a tonal space in which one can move and hear the nearly osmotic movements of the inner sound.

Slowness of movement and repetitions of sound elements make it easier to enter the world of partial tones and microtones, opening the space both behind the direct sound event as it is beginning to pulsate, a world beyond forced emotionality, directed into the sound itself, the strong traditional counterpart to this “introverted” music. It can produce resonance within the listener’s audio consciousness.

The same is equally the case for the slowness of breathing in Im Atem, the microtonality of the cello and double bass in Schwebend and Mit der Zeit and the dying repetitions of Quart Solo.
Time sounds composed, ordered and enlivened, while at the same time moving into many different directions, changing, flowing – limited – unlimited.

The German minimal composer Ernstalbrecht Stiebler celebrated his 80th birthday in 2014.
m=minimal honored the work of this master of reduction with the third release on m=minimal dedicated exclusively to his work.

In opposite to many modern composers that use avantgardistic special effects, Stiebler builds his compositions around small sound spaces.
As the composer himself said in an interview, his music is not intended to be easy. He demands a certain concentration of his listeners. Once you accept it you get rewarded with shifted time perception. A piece of 15 minutes duration can be perceived as 45 minutes.
His music in the last few years gained more and more attention. His works were performed at many festivals including CTM, MaerzMusik, Mutek a.o.
He composed works for Ensemble Modern and the Hessischer Rundfunk (German Broadcasting) commissioned him to compose an orchestral work. For his 80th birthday, the German “Initiative Neue Musik” organized a 3-day festival in Berlin.

Biography:
Ernstalbrecht Stiebler studied composition and piano at the Musikhochschule Hamburg. 1959 and 1960, during the Darmstadt Summer Courses for New Music, he has received numerous suggestions by Karlheinz Stockhausen.
From 1969 to 1995 he was employed as an editor for New Music at Hessischer Rundfunk, where he hosted the show Studio for New Music. In 1989, Stiebler initiated the concert series “Forum Neue Musik” at Hessischer Rundfunk.
Between 1983 and 1991 he also worked as editor of the magazine for contemporary music “MusikTexte – Zeitschrift für Neue Musik”. Between 1997-1999 Stiebler was president of the Society for New Music.
Stiebler’s compositional works are characterized mainly by minimalist shortages, making that the sound spaces around individual sounds open up and engage with each other, are emphasized.
He composed mainly for the chamber ensemble.
Stiebler received in 1966 the scholarship of the Hamburg Bach Prize. In 1991 he took part in the composition seminar silence music in the Künstlerhaus Boswil and received an award. Two of his productions for the Hessischer Rundfunk received a special prize of the Prix Italia, “Piece for Peace” by Alvin Curran and “The Blind Man” by Walter Zimmermann. Stiebler lives with his wife Ursula Stiebler in Berlin.

Werner Dafeldecker, born 1964 in Vienna, Austria
Werner Dafeldecker has a background in European modern music and improvisation, the examination of graphical notations, Fluxus, minimal music, electroacoustic music, jazz, and field recordings.
His musical projects are often inspired and deduced by outside influences such as architecture, physics, photography, and film. Longtime sound and structure studies and the formulation of distinct articulations are in the center of Dafeldecker´s work as a composer and musician and parallel to technological developments often connected with electronic formats.
He lives in Berlin.

Agnieszka Dziubak
Agnieszka Dziubak, cellist, performer, improviser, pionieer of contemporary music. She has premiered
numerous works for cello solo often written for her including composers such as: Peter Ablinger, Jose Antonio
Elguezabal, SvenAke Johanssohn, Ernstalbrecht Stiebler. Recently she has premiered Wolfgang von Schweinitz’s Cello Concerto “Stufengesang I I I ” with Hamburger Symphoniker as part of the annual Festival Klangwerktage, using an adventurous, highly virtuosic innovative technique. Agnieszka can be heard at Festivals and Concert Halls around Europe, USA, Canada, India and is a top prize winner of many International Music Competitions.